It’s not every winter that sees snow fall in the Sahara, yet earlier this week the desert received a dusting of snow – something that hasn’t happened in 37 years.

Unusual, too, were the Arctic temperatures that bedeviled much of North America last week, with some communities seeing -40 C temperatures and large dumps of snow.

With the start of winter a few days off, these early blasts of cold temperatures had people scratching their heads and mumbling, “Where’s global warming?”

The alarmists, true to form, have been quick to point out that one dip in the Polar vortex does not climate make and that this is weather.

Of course, that doesn’t stop the alarmists from proclaiming hot years as evidence of global warming.

The last two years, for example, have been on the warm side and we’ve seen headline after headline proclaiming the balmy winters as proof the earth is indeed warming.

Rarely is it mentioned that the earth experienced a natural El Nino warming, which brings warm weather and rains to the West Coast of North America.

Now, we are likely in the midst of La Nina, which is the opposite of the El Nino and brings cold weather.

The swings in the temperature can be extreme. This year saw a steep drop in temperatures over land as the ocean’s heat was radiated out into space.

Climate is about the long term, not the short term.

But what do climatologists mean by the long term?

The most familiar graphic we see is this one: 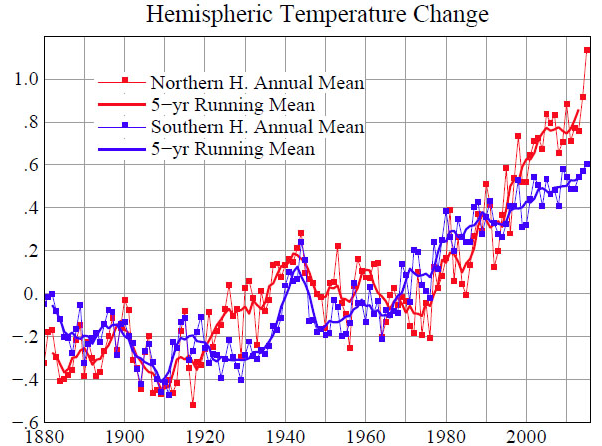 It shows a rapid rise in temperature anomalies since the late 1800s and it has been used to argue that man’s use of fossil fuels since the Industrial Revolution has caused CO2 levels to increase and temperatures to rise.

There is no arguing that CO2 levels have increased since we started using coal and other fossil fuels. It used to be 287 ppm and now hovers around 400 ppm.

Many climatologists would argue that increase in CO2 is the reason temperatures have risen.

But is that the only reasonable explanation?

That is where looking at the temperature record over the longer term is a big help.

Whenever I read that what the earth is experiencing is unprecedented, I have to laugh. I know enough history and geology to know that is pure nonsense.

We can go back even further. Take a look at this chart:

It shows that the current interglacial is colder than all the other interglacials and that the trend over millennia is down, not up.

In other words, this interglacial is coming to an end. It won’t happen tomorrow or in the next one hundred years, but it will end in a few thousand years.

Go back further in time, as this graphic shows, and it’s clear the earth has been cooling for a decidedly long time – for the past 64 million years. 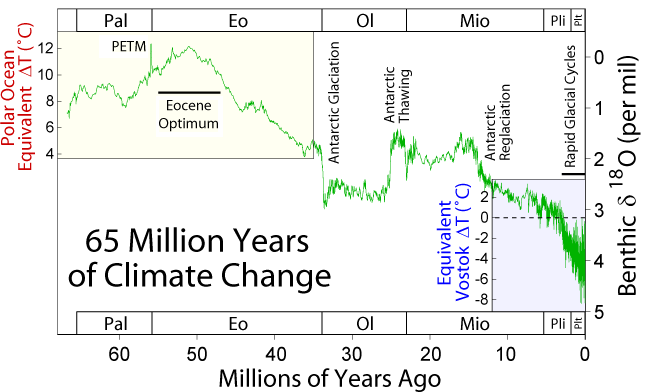 That is what geology teaches us.

Unfortunately, environmentalists today have adopted a very myopic viewpoint of climate and have pushed an agenda that is wrong-headed in so many ways.

In the short term, we are likely to experience colder temperatures, as solar cycles which have seen temperatures rise come to an end.

As the sun enters a protracted quiet period, we are likely to see a return to 19th Century weather, which was much colder and extreme than what we have enjoyed in the 20th Century.

And then the earth will warm again and cool again.

Twenty thousand years from now, North America will once again be covered in glaciers kilometers high and there is nothing we can do about it.