Most Canadians do not appreciate the extent to which Alberta has contributed to the economic strength of Canada and have unfairly characterized its citizens as cry-babies.

The common complaint in Alberta is that over the years the province has contributed billions of dollars to other provinces but has gotten very little in return for this contribution.

Now that the province finds itself beset by a perfect storm caused by the dramatic drop in oil prices and an equally dramatic drop in demand for oil because of the global pandemic, it is expecting some help in return.

Far too many Canadians have taken the position that Alberta should have saved for a rainy day and it is the author of its own misfortune for not having diversified its economy.

It is a tedious argument and one that a recent study by the Fraser Institute ought to put to rest.

The study looked at Alberta’s net contributions to the rest of the country in the form of annual transfer payments.

Now, there is a great deal of confusion about the transfer program. Many people seem to think that it is literally the province digging into its coffers to pay the rest of Canada.

That’s not the case, the program refers to taxes collected by the federal government in “have” provinces and then disbursed in services and direct cash payments to “have not” provinces.

What Canadians ultimately do not under, say the study’s authors, is the extent to which Alberta has contributed to economic and fiscal strength of the country.

Without Alberta’s contributions, the federal deficit would be considerably higher. 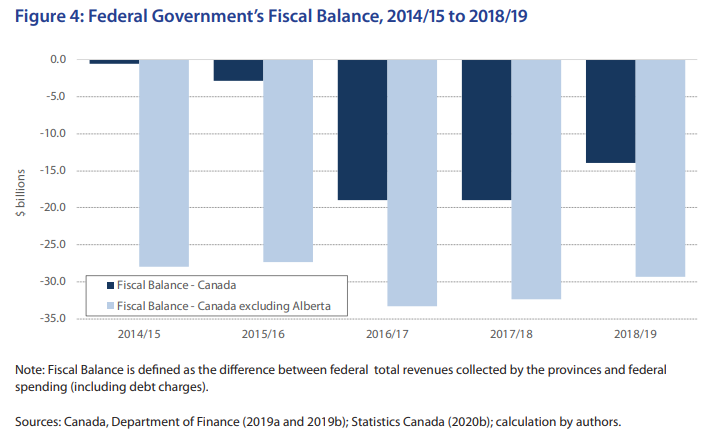 “In the years following the 2008/09 recession, the federal government gradually reduced the federal deficit, nearly eliminating it by 2014/15. However, as figure 4 shows, in the absence of Alberta’s contribution, the federal government would never have come close to eliminating the deficits that emerged during the 2008/09 recession. In fact, in 2014/15 instead of a nearly balanced budget, Canada would still have had a deficit of roughly $27.9 billion.”

Yet today Alberta finds itself on the precipice, contemplating the very real prospect of the demise of the energy sector, hoping the federal government, the rest of Canada, will offer some meaningful help for the hundreds of thousands of workers whose jobs are at risk.

That’s the tragedy of this country. Liberals like to talk about how all Canadians are facing the global challenges together, but these fine words do not translate into meaningful actions.

If the federation is to mean anything at all, the rest of the country must do more than pay lip service to this dream we call Canada.

Alberta has supported the rest of Canada for decades and, today, Albertans expect it to understand that if the energy sector dies it will because Liberals lacked the vision to see beyond their base in Quebec and Ontario.

Global demand for oil, after all, will return. This pandemic will not last forever and nor will the Russia-Saudi Arabia oil price war.

Canada needs to be in a position to benefit from the global economy’s resumption and with it the renewed demand for oil.

Quite frankly, our economic future depends upon it.

If you enjoy my work, please consider dropping me a tip. A number of readers regularly do so and it is greatly appreciated. My Tip Jar.