“Insanity is doing the same thing, over and over again, but expecting different results.”

That quote has been attributed to Albert Einstein, but apparently that’s a tenuous connection and there is actually a fairly fierce debate as to who actually coined it.

It doesn’t really matter who said it first. What does matter is that it so accurately sums up what is wrong with so much of government thinking on CO2 emissions.

Let’s leave aside the issue of whether CO2 is actually good or bad for the climate. The United Nations and a large number of governments have concluded that it is. So let’s assume they’re right for the moment.

If CO2 is bad for the environment, then clearly we must do everything we can to reduce its emission and, perhaps, even eliminate emissions altogether.

That is the rationale behind the push for renewable energy. Wind and the sun, the argument goes, can eventually supply all the energy we’ll ever need and reduce CO2 emissions.

This is actually a testable assertion. Enough countries have been trying to reduce CO2 emissions for decades now, so we can see how they have fared.

Germany has been the leading European country behind the push to reduce emissions and has spent more than anyone on reducing CO2 emissions by developing renewable energy resources. If any country should have seen gains in this area, it is surely Germany.  So how has well has it fared? 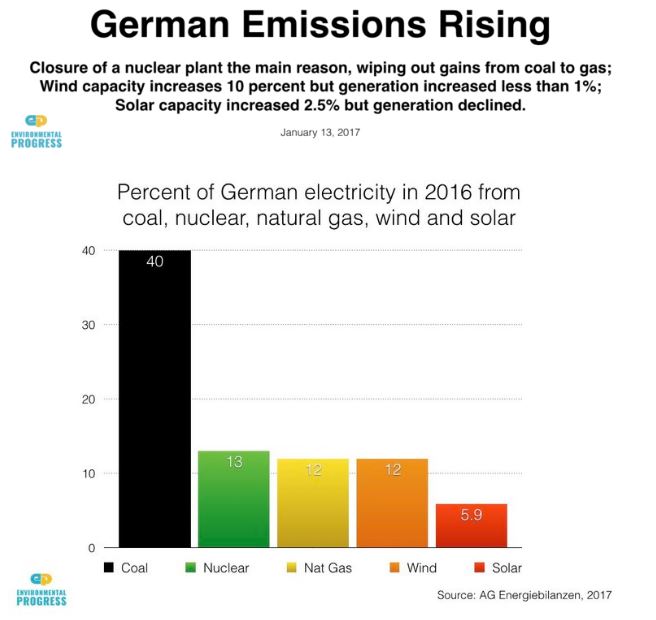 Germany’s renewable energy program, as the Environmental Progress website shows, has been an abysmal failure. CO2 emissions actually increased from 2015 to 2016., despite the fact that it added 10 per cent more wind turbine capacity and 2.5 per cent more solar panels over the same time period. It generated less than one per cent more electricity from wind and one per cent less from solar.

This is the second year in a row that emissions have increased and the reasons are two-fold. One, the country closed one of its nuclear plants. Two, the country received less sunshine and wind in 2015 and 2016.

As climate skeptics are fond of saying, the wind doesn’t always blow and the sun doesn’t always shine. The erratic nature of wind and solar power means that you cannot reasonably expect turbines and panels to produce on a consistent basis.

In other words, you can increase your wind and solar capacity by 100 per cent and still only get a marginal increase in electrical output. The wind doesn’t always blow and the sun doesn’t always shine.

The trouble is that the cost of renewable energy development is staggering. Billions and billions of Euros have been spent by Germany and CO2 emissions have increased. 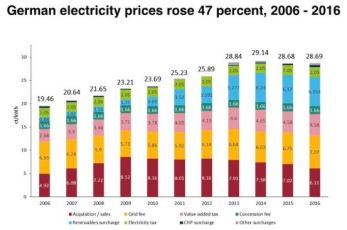 Not only that, but German consumers are now paying more for electricity than they did before. Prices have risen by close to 50 per cent over the course of the past decade.

Now, most people would not mind paying more for electricity if the additional costs actually accomplished the stated purpose – reduce CO2 emissions. But I can’t imagine anyone is happy to be paying more while CO2 emissions are going up.

This is where the insanity quote comes into play. We have the example of Germany’s failure at hand and what are we doing in Canada? Unbelievably we are proposing to do exactly the same thing, but are expecting different results.

Insanity. That’s exactly what it is.